You are here: Home | News | Traveling along a One Way Street in the opposite Direction By Jürgen Sassmannshausen 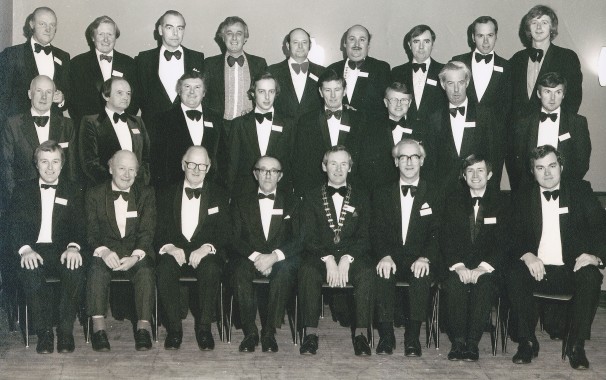 The memories of all 29 Founder Members may differ in some ways they all form a wealth of basic knowledge about our Club. I believe that my own memories go back to the very first seedling planted long before our Club was eventually chartered. Therefore I would like to share it with you.

It was 1977.  Christmas Dinner of the Association of Wexford Industries in the Talbot Hotel. A really delicious meal.  As the meal was finished and we all were about to leave, Sean Scallan mentioned that he would love to see a Rotary Club in Wexford. I told him that I could not agree more and that I would immediately inquire about the next steps.

I had many friends in Rotary and I happened to know that it was not up to us to decide to form a Rotary Club. We had to wait to be discovered and that only a Foster Club was able to set up any new Club. But, should we wait that long? For Christmas I traveled to Germany to have holidays with the whole extended family. Here I met my old friend Colonel Billert. At the time he was President of the Rotary Club of Kusel. He informed me that the incoming District Governor of District 116 Ireland was Hugh McIlwaine of Armagh and advised me to contact him.

Back in Ireland I contacted Hugh McIlwaine. He was completely stunned about my request and said practically nothing in reply. I did not even get an answer to the extend that he would look into the matter. Nothing! We had dared to travel a one-way-street in the wrong direction. Sean Scallan on the other hand approached the Rotary Club of Waterford with the request to become our Foster Club. He was more successful than I was and Waterford was quite enthusiastic about the idea of fostering a new Club. They were prepared to get Wexford going!

At District level they were quite inflexible. It had never happened before. It was not in the Rule Book.  The District did not know how to deal with it. But, should we have stopped our efforts because of the inflexability of District 116 ?  We wanted to have our Rotary Club.

Here in Wexford we started to draw up lists with the names of potential Rotarians. Again Sean’s local knowledge was invaluable and he recruited a good number of very essential members. I think of Ronan Furlong, F.X. Butler, Tom Hasset, Paddy Sheridan and many more.

I was not really able to contribute a lot to the list of potential Rotarians. After all I was a blow in. Ted Doyle, Tom Pierse and Peter Pasdzior were my contributions.  We began to meet at an irregular basis first, in order to discuss which steps we should take next but eventually this developed into regular Monday Meetings in White’s Hotel, which at the time was still in the hands of the Small family. John Small became one of our Founder Members.

Why on earth was the District still hesitating?

Everything had been prepared. We had the potential Rotarians, we had a Meeting Place, we even had a Fosterclub. Their job had been really made easy!  Eventually the District contacted us and sent Jim Hill, at the time District Extention Officer to our aid. Jim who died in November 2008 aged 99 took a life long keen interest in our Club and was life long Honorary Member of the Rotary Club of Wexford. Personally I benefitted a lot from Jim Hill who supplied me with literture about Rotary and who always had some advice for me. He became a good personal friend of mine.

On the 25th of September 1978 we had our Inaugural Meeting. Now we were officially a  Club in District 116.

In a way we were Apprentice Rotarians. We had to be Apprentices for a minimum duration of three months. No new members could have been taken on until we had our Charter. Ronan Furlong, our Founder President guided us along with great skill.    After a minimum of three months we would be ready for our Charter. During these three months we tried to learn all the basics about Rotary.  Three months would have landed us exeactly at Christmas Day the most unsuitable day for Charter Celebrations!  Instead the 16th of February 1979 had been chosen.

Today I know that our Charter is dated December 20th 1978! Nobody who was involved in any way will ever forget this February 16th!

A real Winter day! Snow and ice put the whole country into chaos. It had snowed. We had expected Rotarians from as far as Derry! Will they ever make it? We met in an emergency meeting and Ronan put the question to us wether we shall postpone the whole celebration!?   Unanimously we decided, that this was just not on!! We will go ahead!  Big question again: will District Governor Hugh McIlwaine from Armagh ever make it? He was probably the most essential ingredient in our Charter Celebrations!?

The impossible happened. All our guests arrived! Representatives of all Irish Clubs attended our Charter Celebrations! Some with fresh dents in their cars but they arrived. From Tom Sheridan, President of our Sponsor Club Waterford, I know that his car had turned by 180° and was facing back to Waterford. Two Guards turned him around towards Wexford again.  We received our Charter, received our pins, and became a fully fledged Rotary Club! In retrospect I believe it was really a success story!