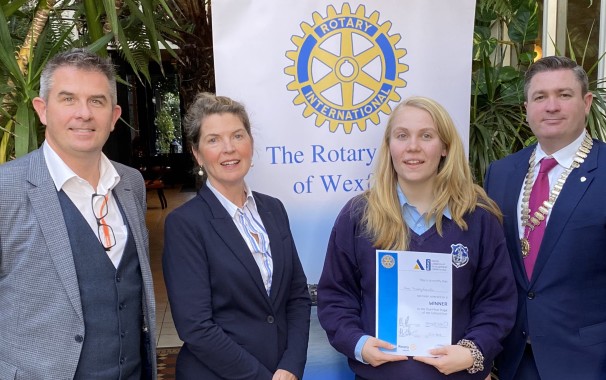 In a competition, which recognises and celebrates Wexford’s youngest leaders, Anna Zwierzchowska, a student attending Selskar College in Wexford town, has been announced as the winner of the 2019 Rotary Club of Wexford’s Youth Leadership Development Competition, which was held in the Riverbank House Hotel on Monday November 11th.

Following entries from 47 students across the county, a representative from each of the 14 participating schools was selected to compete in the Club final, which assessed student’s leadership skills and personal achievements across academia, community, work experience and sport.

It is the first time that a student from Selskar College has been selected as the winner of the annual Club Final and Anna will now represent Wexford at the Regional Final of the competition.

This year, the Rotary Club of Wexford has the honour of hosting the Regional Final, where the Club winners from Waterford, Wicklow, Bray, Dun Laoghaire and Dublin Central will join Anna in competing for the top prize, a place on a week-long Leadership Development Programme which will see the 24 winners from across the country visit Dáil Éireann, Stormont, and the European Parliament in Strasbourg.

‘This year’s applicants are a credit to their families, schools and local communities and I have no doubt that the future of Wexford is in very safe hands’, said Mr. Fitzpatrick before wishing Anna every success in the upcoming Regional Final.